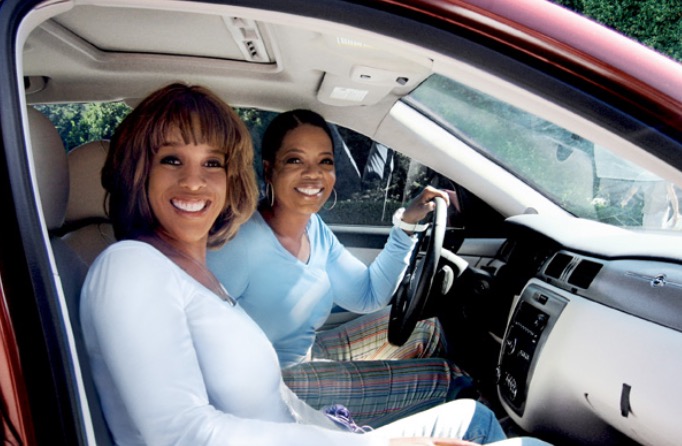 Photo: Kirby Bumpus
I thought I knew a lot about friendship until I spent 11 days traveling across the country in a Chevy Impala with my best friend, Gayle King. We’ve been close since she was 21 and I was 22, and have been through a lot together: my previous bad relationships, her divorce. We’ve vacationed together and worked together on this magazine.

On Memorial Day, we set out to “see the U.S.A. in a Chevrolet.” Remember that commercial from years ago? Well, I always thought it was a charming idea.

When we pulled out of my driveway in California, we were singing the jingle loudly, with vibrato. Cracking ourselves up.

Three days in, around Holbrook, Arizona, we were mumbling the tune. And by Lamar, Colorado, five days in, we’d stopped singing altogether.

The trip was grueling. Every day, six, then eight, then ten hours with nothing but road stretched ahead.

When Gayle drove, she insisted on constant music—XM 23 the Heart. I wanted silence. “To be alone with my thoughts” became a running joke. As she sang along boisterously, I realized there wasn’t a tune she didn’t know. (She called almost every one her favorite.) This was as nerve-racking for me as the silence was for her when I was behind the wheel.

I learned patience. And when patience wore thin, I bought earplugs and headphones.

Every night, landing in a different hotel, we were exhausted but still able to laugh at ourselves. We laughed at my merging anxiety, interstate anxiety, and passing-another-vehicle anxiety. Oh, and crossing-a-bridge anxiety.

Other than that, Gayle will tell you I’m a great driver.

She is indeed a masterly driver, taking the curves on the Pennsylvania Turnpike with ease and steadily leading us into New York. Only one glitch: Her contacts had been in too long and her eyes were tired. So we’re approaching the George Washington Bridge, relieved to end the long run of eating Cheetos and pork rinds at gas stations. Dusk has fallen, and night is approaching fast. Gayle says, “I hate to tell you this, but I can’t see.”

“All the headlights have halos. Do they have halos to you?”

“Uhhhh, no, they do not. Can you see the lines on the road?” I’m shouting now, envisioning the headline—Friends Finish Journey In A Crash on the GW Bridge.

There’s nowhere to pull over, and cars are speeding by.

“I know this bridge very well,” she says. “That’s what’s saving us. And I have a plan. When we get to the toll, I’m going to pull over and take out my contacts and get my glasses.”

“No,” she says. “I’m going to hug the white lines. Can you take out my contacts and put on my glasses?” she jokes.

At least I think she’s joking.

“That would be dangerous and impossible,” I say.

We both sweated our way to the toll-booth. And safely pulled into New York.

The crew following us had T-shirts made: I SURVIVED THE ROAD TRIP.

What I know for sure is that if you can survive 11 days in cramped quarters with a friend and come out laughing, your friendship is the real deal. I know ours is.